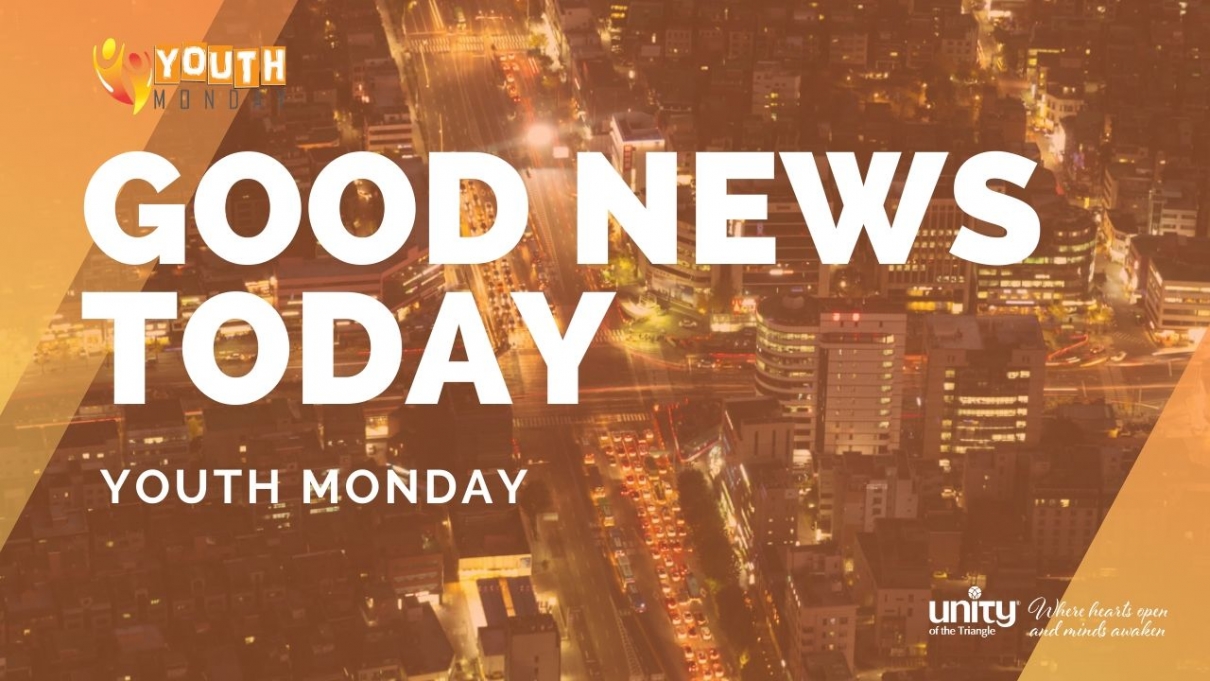 Did you know that positive news stories lead to an increase in hope and optimism? This in turn makes us more likely to notice positivity all around us and become more solutions-oriented, creating a ‘positive feedback loop’. They can also boost self-efficacy; a person’s belief in their ability to make a difference. Are you ready?

May you be inspired by this video created by our awesome Youth Ministry reporters: Unkids Alexander Trahan (10), Madeline Morrill (6), and their Uniteen brother, Gabriel Trahan (11).  Here are the positive news stories they found:

It has been almost a decade since this ultra-rare species of bee was last spotted in the Florida wilderness—but conservationists are now rejoicing after it was rediscovered this spring. First described in 2011, scientists weren’t sure the blue calamintha bee still existed. The species had only been recorded in four locations totaling just 16 square miles of pine scrub habitat at Central Florida’s Lake Wales Ridge.

Those apprehensions changed to delight in March when a Florida Museum of Natural History researcher rediscovered the metallic navy insects—a first step to conserving this understudied and imperiled species. “I was open to the possibility that we may not find the bee at all so that first moment when we spotted it in the field was really exciting,” said Chase Kimmel, a postdoctoral researcher.

Kimmel and his adviser, Jaret Daniels, director of the museum’s McGuire Center for Lepidoptera and Biodiversity, are working on a two-year research project to determine the blue calamintha bee’s current population status and distribution, as well as nesting and feeding habits.

The bee is thought to live only in the Lake Wales Ridge region, a globally recognized biodiversity hotspot and one of the nation’s fastest-disappearing ecosystems, according to a 2015 U.S. Fish and Wildlife Service report. As a pollinator, it depends on another threatened species, a blooming plant known as Ashe’s calamint. “This is a highly specialized and localized bee,” Daniels said.

The blue calamintha is a solitary bee, creating individual nests instead of hives like honeybees. While no nests have been found, the species is part of the genus Osmia, which tends to use existing ground burrows, hollow stems or holes in dead trees as nests. To test whether this bee does the same, the research team made and deployed bee “condos,” 42 nest boxes, in locations where the bee or Ashe’s calamint have been found. Each box contains reeds and sand pine blocks with holes drilled in varying diameters and depths to reveal the bee’s nesting preferences. Researchers will periodically check the boxes over the next year.

“All of this work is a collaboration,” Daniels said. “It takes an army to make it happen, you couldn’t do it without all the broader community of assistance that makes a project work to generate good results.”

Portable Sinks for the Homeless

Portable sinks are being installed across the United States as a means of helping homeless people wash their hands amidst the novel coronavirus outbreaks. Over the course of the last two months, Love Beyond Walls—a Georgia-based nonprofit dedicated to helping the homeless—has been setting up dozens of hand-washing stations in areas popularly visited by rough sleepers.

Terence Lester, the founder who had been homeless himself as a teenager, told Katie Couric on her new YouTube show, The Bright Side, that he started the “Love Sinks In” campaign with the hopes of supporting neglected people living in poverty during the pandemic. “People would say things like ‘I’m fearing I’ll contract the coronavirus because I have nowhere to wash my hands’,” said Lester.

Thankfully, the group has been able to scale up their operations thanks to their support from Grammy award-winning hip hop artist Lecrae, who is also a friend of Lester’s. Since Lecrae joined forced with the organization in March, several dozen sinks have been installed across the city of Atlanta—all of which are sanitized three times every day.

Love Beyond Walls has also teamed up with other homeless charities to install sinks in cities like Birmingham, Austin, Columbus, San Bernardino, New Orleans, Baltimore, and New York City. Couric surprised Lester during their interview, by making a $10,000 donation that will pay for the installation of 50 more portable sinks.

While many people have been left twiddling their thumbs for the duration of the novel coronavirus shutdowns, this 11-year-old athlete took advantage of his free time spent in quarantine to make skateboarding history. This week, Gui Khury became the first skateboarder to ever land a 1080-degree turn on a vertical ramp.

Now two decades after Hawk’s accomplishment, Gui says he was able to complete the jaw-dropping 1080-degree feat by using his time off from school amidst the pandemic to train. Upon expertly landing the triple-turn earlier this week, Gui says he could hardly comprehend his achievement.

“I was like, oh my God, what did I just do?” Gui Khury told Reuters. “I was just like OK, I landed it. Now I am going to celebrate.” Gui later told reporters that he celebrated by sharing a bowl of macaroni and cheese with his family.

I hope you are inspired to look for more good news every day!

Zumba For Kids (and adults, too!) Scroll to top